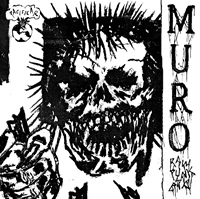 The 2nd 12" by Bogotá raw punkers MURO. Taking their primitive yet complex hardcore punk in new yet familiar directions. Inspired by international hardcore and punk from all ages - for ALL AGES!
US Press on Beach Impediment!

It's been a few years, countless miles of international touring that has exhibited their energetic live show to those lucky enough to witness it, and an incalculable amount of hours spent in rehearsal perfecting a breed of auditory frenzy that is all their own... and at long last we, the hardcore punk faithful, are rewarded with the great MURO delivering to us their latest LP titled "Pacificar." Many would have fathomed a follow up to 2017's "Ataque Hardcore Punk" to be quite the unthinkable feat, but these 11 tracks prove that MURO are far from a flash in the pan like so many others in this day and age and that they don't take the creation of their contributions to the greater punk canon lightly. As a testament to their unwavering work ethic and approach to presenting their art how they see fit, all print material was made by the band and friends at their Casa Rat Trap Collective in Bogota, Colombia and features a series of alternate versions of cover art a la The Execute's 1983 self titled EP compliments of the band's own Carlos Velásquez and Wilson Melo. It's a privilege to kick off yet another decade of hardcore punk with a release of this caliber.

It’s kind of hard to believe that 3 years have already passed since Colombia’s Muro released their previous LP, Ataque Hardcore Punk. With this new full-length entitled Pacificar, Muro seems to be just as unstoppable as their previous record. Because the band has requested the record not be released in its entirety online (props for that), I feel like a lot of people haven’t even heard the whole record yet! Well let me tell ya, it smokes all the way through. Even though I personally don’t think Muro is totally unique musically, and that a lot of other bands may adopt a similar style of hardcore, Muro just feels more extreme and potent than other current bands. I think part of the reason I feel this way is the band’s presentation -- not only in that they come across very earnest and serious when listening to them, but also their dedication to a no-nonsense DIY aesthetic....
...Muro manage to come across as both grass-roots/relatable AND powerfully meaningful.
Muro was supposed to play here in NC, but ended up having to cancel a big chunk of their US tour. I’ve heard they’re an explosive and powerful live band, so I hate that a lot of us missed out on seeing them. Similarly, due to the crazy situation we’re all currently dealing with, I think Muro’s recent tour got cut short while they were in London. Bummer when a killer band gets the short end of the stick. Grab this LP to show your support!
Jeff

SORRY STATE - record of the week

Pacificar is the much-anticipated second album from this punk phenomenon from Colombia. Muro hasn’t taken the punk scene by storm because their sound is radically new; instead, their strength is that they’re a talented band with command of a broad range of punk and hardcore styles who puts everything they have into their music. While Muro has plenty in common with the history of raw and passionate hardcore that South America has produced over the past four decades, their music is eclectic, with hints of oi! / street punk, dramatic Japanese hardcore, and ripping US hardcore that vary from track to track. Tracks like “Fatasia Del Progreso,” “No Hay Lugar,” and “Pacificar” have subtly melodic chord progressions that remind me of later Indigesti or early Funeral Oration, while the ripping main riff to “La Ciudad Es Hostil” makes perfect sense on the same label as Blood Pressure and Loose Nukes (Beach Impediment). Many tracks also have dramatic, crashing chord changes that send Muro’s already-high emotional register through the roof. It’s easy to understand why this music made the crowd explode at this year’s Static Shock Fest!. With Pacificar building on the strengths of their debut, this record firmly establishes Muro as one this era’s deoutufining bands.

One benefit of quarantine has been catching up on things we might have missed—cleaning our homes; meditation practice; an eighth re-watch of The Sopranos; and maybe a bit of [warranted] unbridled rage, in the form of Pacificar, the new LP from Colombian hardcore punks MURO, just released... The release went under my radar, until the band experienced pandemic-related difficulties returning home from Static Shock Weekend in London, inciting a call for financial support among the punk community across the globe (yo buy this record).
MURO has refrained from posting the entire album online, save for one track, “Fantasia Del Progreso,’ and from the initial gut-wrenching plunge of bass, you got a pretty good idea of the fury that lies in waiting on the rest of Pacificar.
Drums chug in like a freight train set aflame and sent barreling towards oblivion, as guitars tease overhead like biblical tongues of fire. Only this blaze is not representative of anything good or safe—the antichrist is come. Nothing is safe here as the band enters in with a wrath of breakneck velocity. The “fantasy of progress” is shattered in D-beat fashion, everything stomping the foundations on which we’ve grown all too comfortable. The earth is upheaved, the sky scorched. Civilization falls back on itself as the song’s title is shrieked atop the crumbling composition. Welcome to hell.