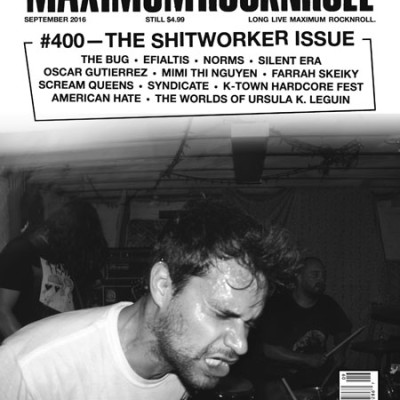 Here it is: the September 2016 issue, Maximum Rocknroll #400. It’s hard to believe we’ve been at it for this long, so this time we’re turning back to reflect on the people that make it happen every month: our shitworkers. Every band featured in this issue features at least one volunteer or contributor to the mag. We’ve got the Welsh-Greek-Cypriot maelstrom that is London’s EFIALTIS, Oklahoma City’s AMERICAN HATE and Chicago’s the BUG scrambling the signals of Midwestern hardcore, the uncompromising melodic punk of the Bay Area’s own SYNDICATE and SILENT ERA (perhaps the only all-MRR-shitworker band?), and NORMS out of Budapest offering their perspective on punk life in an unforgiving modern landscape. On top of that, we have interviews with Evolution of a Race Riot zinester and scholar Mimi Thi Nguyen as well as former MRR coordinator Arwen Curry discussing her upcoming documentary Worlds of Ursula K. Le Guin. We also have current shitworkers revealing their work inside and outside of the pages of MRR: San Francisco/Los Angeles based journalist Oscar Gutierrez, Washington’s Farrah Skeiky (official photographer of the NWODCHC?), and the Bay Area’s Scream Queens giving us the dirt on their eponymous radio show and their upcoming magazine. If that weren’t enough, we’ve also got a photo spreads and commentary from Copenhagen’s K-Town Hardcore Fest, hundreds of reviews, all of your favorite columnists, and—get this—a table of contents. That’s right, this issue debuts a fresh new look for MRR. It only took us 400 issues to get page numbers, who knows what the future may hold?