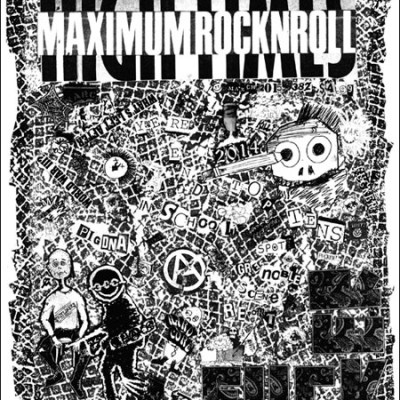 Maximum Rocknroll #382, the March 2015 issue, features our annual Year-End Top Tens! MRR reviewers, columnists, and coordinators get to have their say about their favorite records, tapes, and zines of 2014. As always, we asked some of our friends to contribute lists too—see what Ralph from Not Normal Records and Tapes, Paco from La Vida Es Un Mus, Laura from RAKTA, Ben from Nuts!, and many more have to say about the records they consumed and were consumed by last year. Martin Sorrondeguy sat down with legendary SST producer Spot to talk about his recent photo book, new MRR Coordinator Grace interviewed NYHC rippers IN SCHOOL, and former MRR Coordinator Golnar Nikpour had a conversation with Leatherfist, Shit Zoo, Tilted HC, and Chelsea of PIG DNA. The little piggies also designed our cheeky cover (how many times can you spot the word "fucker"?). Plus, we've got a scene report from Grenoble, France: punk mecca tucked into the Alps! We have all the columnists you love to hate, including a new monthly column from Colin Atrophy of Slice Harvester zine and a contribution from hacker/whistleblower Jeremy Hammond writing from federal prison; and as always the most extensive punk record review section in print.