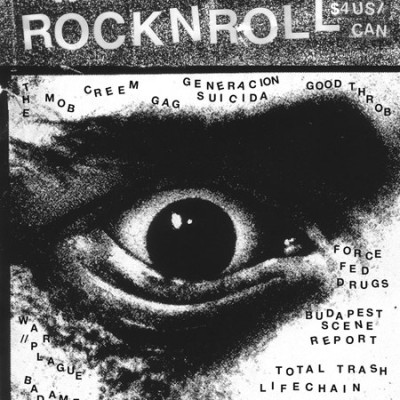 Another year is done, so let's tell 2013 to fuck off with a new issue! MRR #367 is out now! Pennsylvania's BAD AMERICAN has a lot going on and they are stoked to share the experience of their recent Midwest tour and new album in the works. Garage punkers CONCRETE WORMS talk about what it's like to be a long-running band in the Serbian punk scene, and Minneapolis' WAR//PLAUGE tells us how they keep it DIY and keep it punk! Olympia, Washington's GAG gets wild with us on the start of their US tour—poppers! Realtree Camo! Fog! UK Anarcho punk band THE MOB reminisce about the '80s anarcho punk scene and talk about their new single, "Rise Up!" and London's GOOD THROB smash misconceptions about their sound and the ladies in the band discuss how they are received in the punk community. GENERACION SUICIDA from South Central (not East) L.A. get ready for their upcoming European tour, and we get a taste of brutal hardcore attack from East Coasters FORCE-FED DRUGS, who buck the trends and make music that means something to them. We corner New York's CREEM on their European tour and discuss the culturalization of punk, D-beat raw punx LIFE CHAIN invite us to come visit Halifax, Nova Scotia, and we take a trip to Hungary with a Budapest scene report. Also in this issue, a posthumous interview of post-punk band SAFEWORDS from Minneapolis, TOTAL TRASH talks about keeping punk cute while still having a biting edge, and last but not least, you get a taste of our upcoming queer punk issue with DIY filmmaker Julia Ostertag! All this plus columns, news and the most extensive punk review section in print!