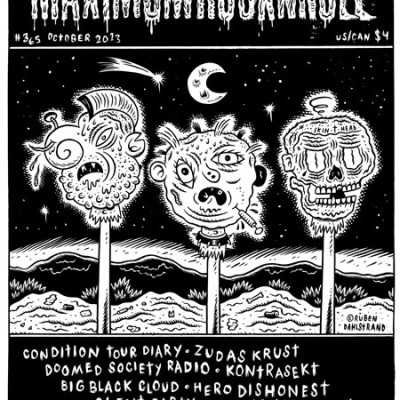 In MRR #365, October 2013, we talk to booming crust band ZUDAS KRUST from Jakarta about their local scene and the what it's like to be a punk in Indonesia, hardcore crusties KONTRASEKT from Minneapolis discuss their new 7″ and why the Midwest rocks, we talk about the importance of punk networking with the brain behind Doomed Society Radio from Calgary, and we get the scoop from Portland's psych garage rockers BIG BLACK CLOUD. Then we take a wild trip up and down the West Coast with a CONDITION tour diary, we talk with Todd Greene of Clearview Records about the label's roster (which included DROPDEAD, DAG NASTY, JAWBREAKER and SCREECHING WEASEL, to name a few), no-frills HC ragers HERO DISHONEST from Finland share impressions from their recent US tour, and HELVETIN VIEMÄRIT from Brazil analyze why they love Finnish hardcore so damn much! Next, VIOLENT PARTY discusses their new record and relocation to Portland, we get introduced to budding Stockton PV/fastcore band MALCOLM, we have have an impressive Brno, Czech Republic scene report, a photo spread from Finland's Puntala-Rock fest, and a killer Halloween cover by Ruben Dahlstrand made specially for your visual indulgence. All this and much more, including guest columns, Shitworker of the Month, What's the Scoop, demo and zine reviews and, of course, the most extensive record review section in printed punk today!