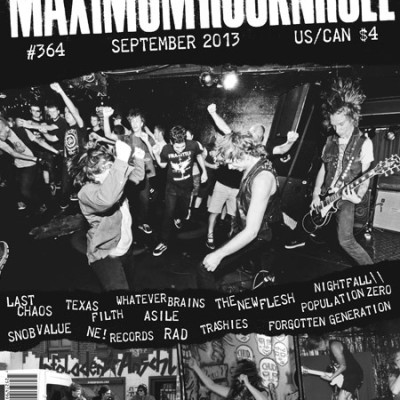 Issue #364 of MRR is out and ready for you to get your grubby hands on! This month, in the September 2013 issue you will find: ASILE talking about their introduction to punk, their new album and all things French-Canadian; Indonesia's oldest Celtic punk band FORGOTTEN GENERATION chatting with us about Indonesian punk and their hopes of uniting punk soccer hooligans in their country; LAST CHAOS describing punk tour-relations between Australia and Southeast Asia, and inviting us all to party with them; and we talk with Sweden-based NE! Records about its latest releases and the early days of punk in the ex-Yugoslavian region. Philly dark hardcore bands POPULATION ZERO and NIGHTFALL make it easy for MRR by interviewing each other and discussing their local scene, and hardcore band RAD talks about their influences, day jobs and what makes Sacramento so…rad! SNOB VALUE from Germany discusses the European political climate and how it affects their music; Oakland's dark punks THE NEW FLESH have an extensive chat about philosophy, their new record and the relationship between the internet and DIY music; and Seattle's TRASHIES deliver what may be the weirdest interview we've ever printed, and discuss worms, snakes and primary gunk. we're introduced to the bizarre punk universe of the WHATEVER BRAINS from Raleigh, NC, and last but not least, a Texas Filth scene report sheds light on everything lewd, queer and punk from the Lone Star State! Plus, as always, a photo spread, guest columns, New Blood, Shitworker of the Month, all the zine, demo, movie and book reviews you could cram into your brain, and the most extensive punk record-review section in print today!