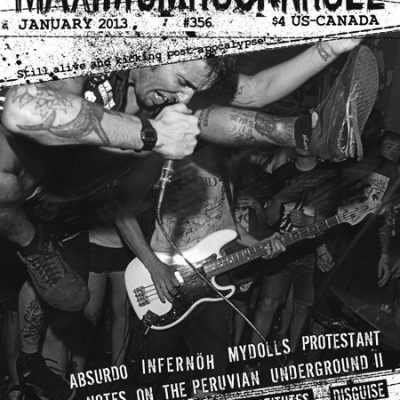 Happy New Year! We made it through the apocalypse and, like the mighty cockroach, Maximum Rocknroll survives! Fresh off the presses comes the illuminating January 2013 issue — MRR #356! Here you will find punk-as-fuck ABSURDO discussing the absurdity of the world, a talk with Houston's early experimental post-punk legends MYDOLLS, and dark crust with hints of hardcore from Milwaukee's PROTESTANT. Sweden's INFERNÖH tell us about their local scene and their version of furious Swedish hardcore, and truly polluted hardcore band DISGUISE fills us in to what's happening in Irish punk. Brazilian filmmaker Carol Pfister discusses her new film Viva Viva about the São Paulo scene, while youthful grind merchants from San Jose, CA, TADROATEV (THESE ARE DA RESULTS OF A THOUSAND ELECTRIC VOLTS) let us into their reality in punk, blunt by blunt, and Grand Rapids, Michigan's PROCESSION talk about their brand of dark, ethereal post-punk. Australia's Off The Hip Records shares insight about making DIY garage happen in the Southern hemisphere and we hear from snotty hardcore punx from Finland via Texas, SECRET PROSTITUTES. We also have the second installment of Notes on the Peruvian Underground (part one is in MRR #353 and part three in MRR #359) and as always we have an array of columns, news and the most extensive review section in punk rock print!