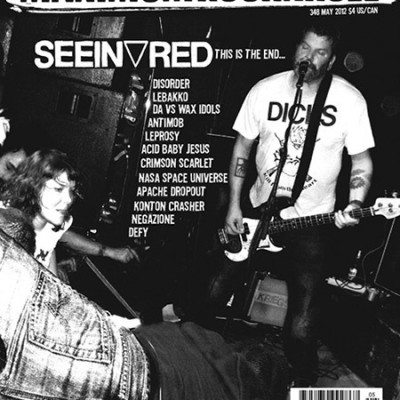 In MRR #348, we say farewell to Holland's legendary SEEIN RED, architects of the European HC scene in various forms for close to thirty years, who played their last show in March. But that's not all! We celebrate May 2012 with a hilarious and informative interview with noize terrorists of note DISORDER, true legends of UK82, some Greek hardcore courtesy of ANTIMOB, and some Greek garage psyche punk from ACID BABY JESUS. We've got rad Finnish punks LEBAKKO, the out-there sounds of APACHE DROPOUT, and Heather from San Francisco's hook-laden WAX IDOLS in conversation with Lorna from early Chicago post-punkers DA. Shall we go on? There's Brazilian HC ragers DEFY, SF goth punks CRIMSON SCARLET, Australia's LEPROSY with their modern take on UK82, some mutated brainwave hardcore from Southern California's NASA SPACE UNIVERSE, a look at the record label Konton Crasher, and a continuation of our one-page interviews with classic Italian HC bands, this time with NEGAZIONE. All o' that plus the usual array of columns, news, and the most extensive punk rock review section in print. Read it and weep!