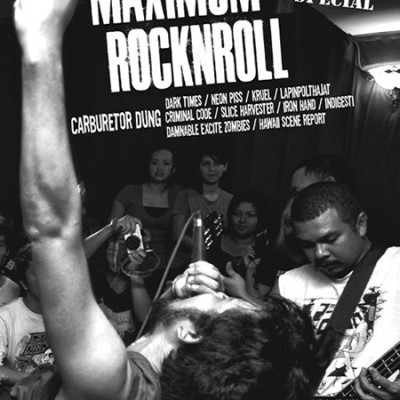 It's the April 2012 issue of MRR, and just in time for election season we have a special issue looking into Ron Paul's candidacy: what he stands for and what that means for the punks. We also have an epic, hilarious and fascinating interviews with Colin Hagendorf of Slice Harvester zine, longtime Malaysian punk force CARBURETOR DUNG, local melodic punk ragers NEON PISS, LA's d-beat destroyers KRÜEL, and with Japan's DAMNABLE EXCITE ZOMBIES who are as maniac as their name would suggest! As part of a series we are running of translated interviews from the killer Italian HC one-pager 10 Anni di Mucchi Selvaggi e Ossa Rotte in Italia, we have the legendary INDIGESTI. And there's more! We have some Connecticut/ Massachusetts crust from IRON HAND, a continuation of the Finnish hardcore tradition courtesy of LAPINPOLTHAJAT, DARK TIMES from Norway with their rad Midwest-style hardcore sound, and Seattle's CRIMINAL CODE mine some post-punk territory. All o' that plus a rad Hawaii scene report, the most extensive review section in punk print, and all those columns you love to hate.