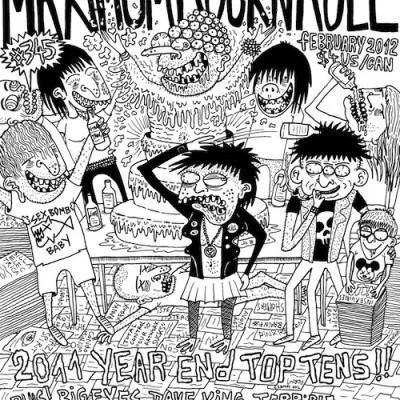 You've waited long enough — MRR #345, the February 2012 issue, is finally here! With sick cover art by Mr. Alex Ratcharge, it's the always epic year-end top ten issue, when all your favorite MRR shitworkers, reviewers and columnists opine about 2011's best DIY punk releases. And that's not all. We have interviews galore, starting with the artist behind the CRASS symbol, Dave King, Swedish cult favorites TERRIBLE FEELINGS, New Jersey's own epic BIG EYES. We've also got the second and final part of the tour diary of local Bay Area hardcore warriors ZERO PROGRESS — an epic in itself! It doesn't stop there… we head up north to talk to UNRULED, legendary Canadian hardcore destruction from the early 1980s, and RAPID LOSS who are keeping the HC mutated in Canada now! All o' that plus the usual array of columns to get enraged by, and the most extensive review section in punk rock print media!