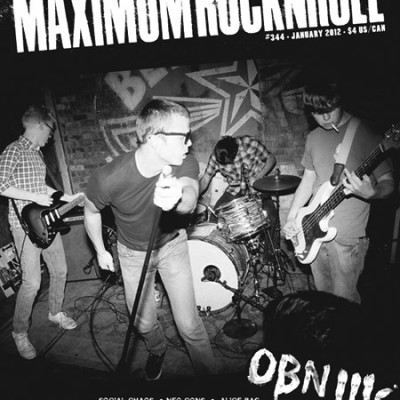 It's the beginning of the end! January 2012 is here and thus we present you a new issue of Maximum Rocknroll, number #344 to be precise! This month we have Austin, TX's furious garage punk brutes the OBN IIIs, San Francisco's hardcored-by-death savants the NEO CONS, we have Brazilian brutality courtesy of SOCIAL CHAOS, some Midwestern crust from WARTORN, some D-beat destruktion from Boston's BLOODKROW BUTCHER, Australian noize mutators, the attractively named VAGINORS, the legendary WRETCHED, architects of Italian hardcore! Plus we got street punk from SLICK 46 and the TOUGHSKINS who interview each other, a report on the UK's Means to an End fest, as well as the final SHITTY LIMITS show, and part one of a two-part tour diary from the Bay Area's ZERO PROGRESS. On the print front we've got an interview with No Gods No Mattresses zine and a talk with the awe inspiring Alice Bag about her new book Violence Girl! All this madness plus the most extensive review section in punk rock print and all of those columnists you love to hate!