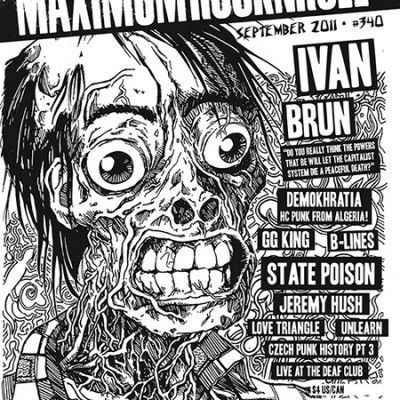 Maximum Rocknroll #340, the September 2011 issue, hits the stands with an interview with — and Pushead-inspired cover by — French artist Ivan Brun. We have an enlightening interview with Algerian punk band DEMOKHRATIA discussing religion, punk, politics, and their exciting first tour. Noisy garage rocker GG KING gives us the low down about his new record. Noise-core punx STATE POISON from France talk about their Japanese tour and life as the cutest band in France. This issue also features squawks from bratty Canadian hardcore B-LINES, a discussion with Britain's own KBD-style band THE LOVE TRIANGLE, raw, distorted Canadian punkers UNLEARN, a discussion with artist and longtime Slug and Lettuce illustrator Jeremy Hush from Hush Illustration, an intriguing excerpt contributed by Dave Ensminger about the Deaf Club — the late ‘70s social club for the deaf that moonlighted as a punk club — and the last installment of a three-part series of the history of Czech punk. All of this plus a mini Delaware scene report, a comic by Avi Spivak, and all the great columns and reviews including the most extensive review section in punk! Get it now!