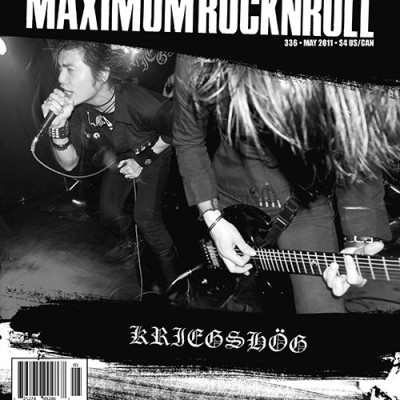 It's in! Maximum Rocknroll #336, the May 2011 issue, has hit the stands and it is not to be missed! We have interviews with powerful Japanese hardcore ragers KRIEGSHÖG, and Steve Ignorant explains his motivation for his controversial recent solo tour playing CRASS songs. TEARGAS from Australia give us some insight about their imagery and the drive to make their style of hardcore, TANTRUM delves into what it is to be a punk in Japan and the motives behind playing Italian style thrashcore, and we talk to London's disjointed, aggro post-punkers HYGIENE. We have the SHOPPERS from NY discussing their politically tinged, melodic pop punk; punk author and publisher Chris Walter keeps it gritty; old schoolers ADRENALIN OD; and '80s style hardcore band SPASTIC PANTHERS from Canada. In "Crass Commercialism" our writers discuss the seemingly paradoxical nature of Steve Ignorant's tour and the message of Crass, and we have a great Hungarian scene report covering "Defekt Punks." All of this plus a massive amount of record reviews, news, and columns!