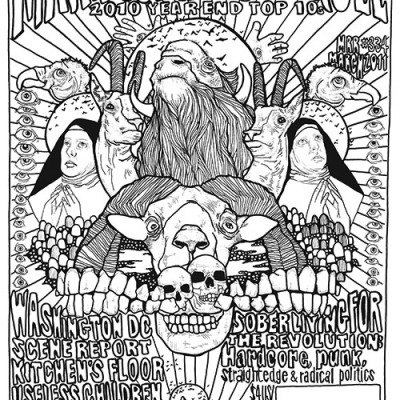 With amazing cover art by Eliza Childress, the new issue of Maximum Rocknroll is on the loose! This is MRR #334, the March 2011 issue, and features the ever-coveted Top Tens of 2010. This year's Top Tens are the largest in Maximum Rocknroll‘s history with submissions by our reviewers here at home and a number of people active in the punk scene overseas. Also in this issue: an interview with the classic, Crass-influenced, Bay Area anarcho punk band A STATE OF MIND; and the heavy and noisy USELESS CHILDREN from Australia. Another Aussie band, KITCHEN'S FLOOR, discusses their brand of noisy downer-pop, and author Gabriel Kuhn discusses his new book, Sober Living for the Revolution, covering the political movement within punk through the straight edge niche. We have a Washington, DC scene report and all the great columns and reviews, including the most extensive review section in punk. Get it now!