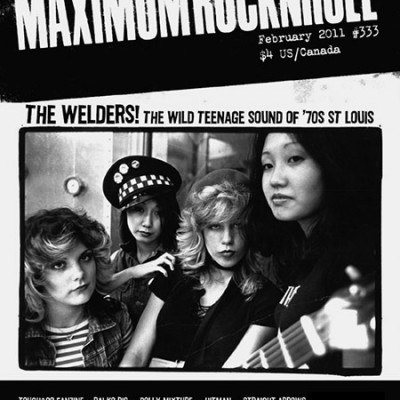 It's the February issue of Maximum Rocknroll — #333, halfway to the Number of the Beast! This issue's cover stars are the WELDERS out of St Louis. Formed in 1975 by four teenage girls, they were arguably that city's first punk band, and their recent, never-before-issued 7″ is exciting stuff… We also have an extensive interview with RAI KO RIS — raging, feminist, anarchist punk from Nepal — a report from ESKAPO‘s recent tour of the Philippines, and an interview with long-running Balkan hardcore heroes HITMAN. There's a look at the recent Touch & Go fanzine book with Tesco Vee, an interview with another teenage girl band from the 70s, the UK proto-twee pioneers DOLLY MIXTURE, Australian garage maniax STRAIGHT ARROWS, and a look at punk-run record store Celebrated Summer. We also have two great scene reports: one that covers the Venezuelan punk scene from a historical and current perspective, and an Olympia, Washington scene report that, in old school MRR style, includes interviews with tons of local bands from that area, including MILK MUSIC, HPP, WEIRD TV, BROKEN WATER, GUN OUTFIT, RVIVR, HAIL SEIZURES, SON SKULL, WHITE BOSS, and the HYSTERICS. All of that plus the most extensive review section in punk! Get it or regret it…