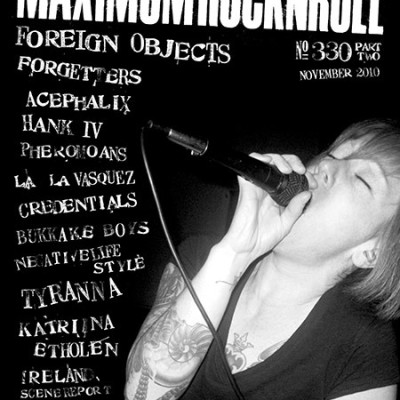 Hey punk rockers, the November issue of MRR is here! On the cover this month we have FOREIGN OBJECTS from Boston who take the inventiveness and power of the riot grrrl idea and make some of the raddest hardcore you will hear. We have interviews with local metal crust behemoth ACEPHALIX, the Swell Maps-esque garage punks PHEROMOANS the from the UK, and the the C86-styled, pop inflected punk of LA LA VASQUEZ. We talk to the FORGETTERS from NYC, a band that features former members of JAWBREAKER and plays packed basement punk shows — yes, the kids are psyched — and we've got Boston's most recent pop punk export, the CREDENTIALS. We also interview BUKAKKE BOYS, representing Atlanta's hardcore underbelly; NEGATIVE LIFESTYLE, representing small town Sweden, and HANK IV from San Francisco, who're keeping Crime's legacy alive. And last but not least we have TYRANNA, one of the early Canadian punk bands, playing a cool mix of classic US punk and UK art punk with amazing female vocals. All of that plus a scene report from Ireland, the last part of a look back at '80s Finnish punk photography with Katriina Etholén, and the best reviews, news and columns in the world!!