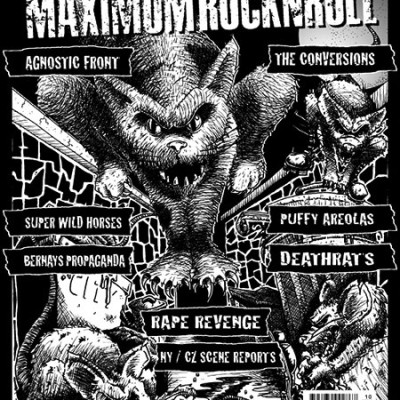 MRR #328 has hit the newsstands! This month we have an interview with Roger and Vinnie of AGNOSTIC FRONT, the last interview by Mr. Bruce Roehrs (RIP), from his all time favorite hardcore band. The PUFFY AREOLAS are continuing Ohio's fine tradition of musical mutation, whilst SUPER WILD HORSES from Australia have been described as FLIPPER trying to play the SHOP ASSISTANTS, and we have some politically charged, female-fronted new wave from Macedonia courtesy of BERNAYS PROPAGANDA, which features ex-members of FPO. RAPE REVENGE from Canada is a mostly female, mostly power violence band, and DEATHRATS from DC are part of a crew of bands who are making sure hardcore stays harDCore in a most thrilling manner. Boston's CONVERSIONS played driving complex punk inflected hardcore with some of the most ferocious female vocals. There are scene reports from New York City, and Brno in the Czech Republic, supposed to be one of the best places to play when touring Europe. We have cover art by Welly of long-running UK zine Artcore, and as always, the most extensive review section in punk, and all your favorite columnists!