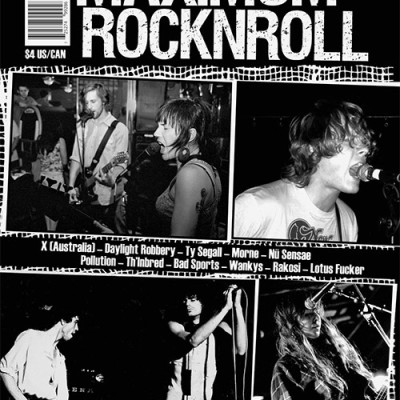 It's time for another issue of MRR! Numero 325, the June 2010 issue, features interviews with San Francisco garage punk TY SEGALL, plus we got Hungarian hardcore courtesy of RÁKOSI, and heavy noise wildness from Canada's NÜ SENSAE. From England we have the WANKYS, who are aiming for a sound closer to CONFUSE or GAI than anything outta their homeland, and we have LOTUS FUCKER, who are also drawing from that Japanese hardcore sound with some added East Coast crust brutality, plus some heavy yet nuanced crust courtesy of MORNE from Massachusetts, and New York's POLLUTION adding further mutations to the idea of what hardcore is. Chicago's DAYLIGHT ROBBERY evoke the darkness of the WIPERS with the best male/female vocal trade offs we've heard in a long while. We have classic, genre defining Australian punk with X, just prior to their first ever US tour, some off kilter 1980s West Virginian hardcore from TH'INBRED, and the BAD SPORTS demonstrating some early punk influences filtered though a Texan lens. All of this, along with the usual news, columns and the most extensive review section in punk!