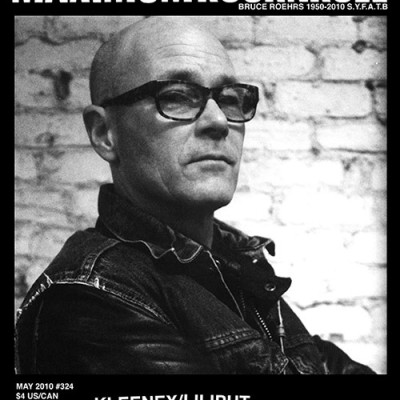 The May issue is here, featuring a tribute to one of the cornerstones of MRR, Mr. Bruce Roehrs, who tragically passed away this month. We, along with the rest of the punk scene were devastated by the loss. Bruce worked on the magazine for over fifteen years, first in the review section, but he is most known for his monthly music column, through which he became a defining part of MRR. There are also interviews with Japanese cult punkers ISTERISMO, New Orleans hardcore mutants NECRO HIPPIES, Swiss girl punk innovators KLEENEX/LILIPUT, and Pittsburgh antagonists ROT SHIT. We got pop punk covered with Florida surf punks TUBERS and the North Western sounds of RVIVR. Denmark is represented with the surly teenage post punk ICEAGE, and there's a piece on some punks who moved to Cairo, IL… All of this plus columns and the most extensive review section in punk…