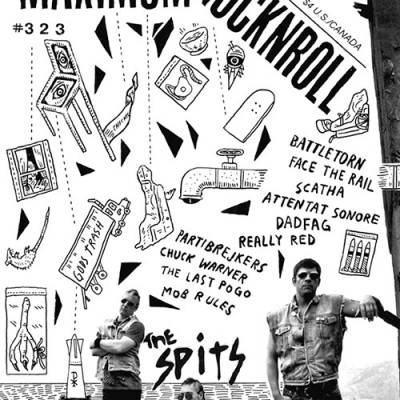 Another month and another issue of Maximum Rocknroll hits the newsstands! It's the April 2010 issue, MRR #323, and it's full of the usual things you expect from the miscreants at MRR. We have cover stars THE SPITS revealing their true warped psyches, then there's San Francisco's post riot grrrl punkers DADFAG, along with a history of 1980s garage rock sensations, the PARTIBREJKERS from the country formerly known as Yugoslavia. A controversial interview with John Paul, bass-guitarist of ‘80s Texas punk legends REALLY RED, plus an interview with Chuck Warner, proprietor of the reissue label Hyped to Death, who are responsible for the classic Messthetics compilations. French punx ATTENTAT SONORE check in, as do Scottish crusties SCATHA and the Bay Area's own skate punks FACE THE RAIL. There's some heaviness from the East Coast courtesy of BATTLETORN, a look into the early Canadian punk scene thanks to film maker Colin Brunton who made the genre capturing punk movie The Last Pogo, and British hardcore is represented with MOB RULES. Plus all the usual photos, columns and the most extensive review section in punk… Cover art by Kevin McCarthy, Cover photos by Canderson.