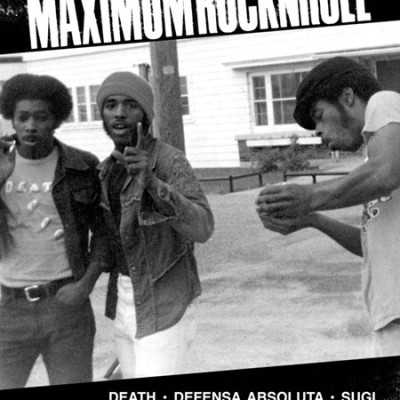 The March 2010 issue of Maximum Rocknroll is hot off the presses! Our cover feature is an interview with DEATH, the almost forgotten, classic 1970s Detroit African-American proto-punk band. We also talk to straight edge rockers DEFENSA ABSOLUTA from Peru, and we get the skinny on the controversial band DRY-ROT, whose religious undertones have caused quite a stir. Midwest mutant hardcore kids KIM PHUC reveal their secrets, and we hear from Japan's answer to Pushead, Sugi, a legend in the world of Japanese hardcore record art. We've also got an interview with Michigan's art-noise party-starters, DRUID PERFUME, and we leave you with a huge list of our contributors' top ten favorite records from 2009. All that plus tons of columns, news, and the most extensive record, book, and zine review section in punk!