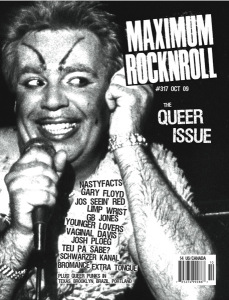 The much anticipated Queer Issue is here, with features on queer punx around the globe, from Austin to Berlin, Portland to Brazil. We've got a great autobiographical piece by Gary Floyd, front man of Texas punk pioneers THE DICKS, and a feature on queerness in early TX punk, from the MYDOLLS to the THE DICKS and the BIG BOYS — hence our cover boy being the late, great BIG BOY, Randy Biscuit Turner. We have a talk with the formerly straightedge but always hardcore LIMP WRIST, and Jos of classic Dutch hardcore bands such as SEEIN RED and LÄRM. Also not to be missed are interviews with Chicago's BROMANCE, Philly's EXTRA TONGUE, and the Bay Area's YOUNGER LOVERS, fronted by our very own MRR columnist Brontez. We got some hardcore queer punk from Brazil with TEU PAI JÁ SABE? and scene reports on queer punx in Brooklyn and Brazil. Josh Ploeg of classic queer punk bands MUKILTEO FAIRIES and BEHEAD THE PROPHET talks about his new band and life as a vegan chef, and there's a piece on the queer Berlin-based squat, Schwartzer Kanal. If that's not enough, we have interviews with drag artist and musician Vaginal Davis and the filmmaker GB Jones, who were in the first MRR queer issue a few years back, and one with Kali of the NASTYFACTS, who were a part of the early NY punk scene. All of this plus the usual news, columns and the most extensive review section in punk!