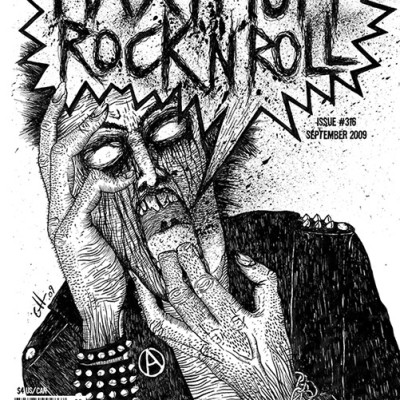 MRR magazine #316 (Sept '09) features killer cover art courtesy of Guillem of Barcelona's DESTINO FINAL, and an epic interview with classic crusters AMEBIX, from their recent US tour… There's an interview with Oakland's own BORN/DEAD, one with an Australian hardcore band MEATLOCKER, and some more heavy hardcore with Florida's DIVISIONS. We got a European tour diary from Chilean punkers ALTERCADO, and a feature on the three day hardcore punk party that is the No Way Fest. There's the buzzsaw pop-punk of SOMETHING FIERCE from Houston, and MUTATING MELTDOWN, who are continuing the Austin lady-made art punker tradition… There's a Lance Hahn feature on Crass Records' poet in residence Nick Toczek, an interview with Isy from the Cowley Club, an anarchist community center and show space in Brighton, UK, as well as an Albany scene report, and a piece on Albany's teenage dirtbags ANAL WARHEAD. All of this plus the usual columns, news, movies, books, and the most extensive record review section in punk!