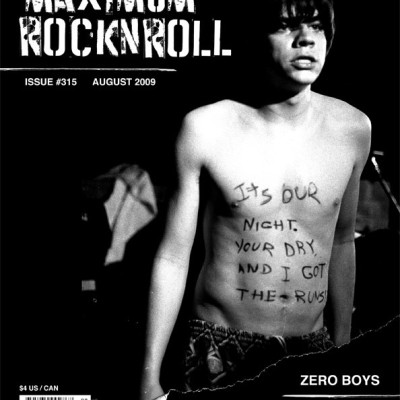 The August issue of MRR features an extensive interview with the all-time classic Midwestern hardcore band the ZERO BOYS, as well as a piece on early New York City art punkers COME ON. There's an interview with ETACARINAE, from Barcelona, Spain, who plays heavy hardcore with a Japanese influence, plus another with INSOMNIO, from Zaragoza, Spain, who plays dark, melodic hardcore with a hint of Greg Sage's WIPERS. We've got Bay Area hardcore covered with two East Bay favorites: the heavy hitting SKIN LIKE IRON, and the female-fronted fastcore of PUNCH. Mississippi garage misanthropes the BLACK AND WHITES are interviewed by the band LOVER! And we've got a feature on the mystery bedroom sounds of the BLANK DOGS, along with Portland crust heroes RESIST. There are also scene reports from London, UK, and Brest, Belarus, along with the usual columns and, as always, the most extensive review section in punk!