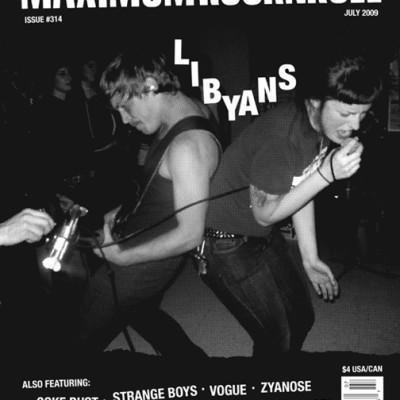 We've got some killer interviews and scene reports this month from around the world. But Boston and DC are in the spotlight—we get the skinny on female-fronted Boston hardcore punks, THE LIBYANS. The current wave of DC straightedge hardcore bands is represented with COKE BUST, and we've got an interview with the raging, non-sxe, but DC based all-girl hardcore punk band, TURBOSLUT. We've also got interviews with Austin's garage flavor of the month, STRANGE BOYS, who dish about brotherly love, and another with the elusive Belgian hardcore band, VOGUE. The controversial early '80s styled Italian band, SMART COPS weigh in, and ZYANOSE also get a feature, true sounds of noise damage from Japan. There's an extensive scene report, a recap of all that has happened in Canada's fine city of Toronto over the past couple of years, from the break up of THE BAYONETTES to CAREER SUICIDE's upcoming LP to bands like URBAN BLIGHT and BAD CHOICE. We also cover the political and social history of squatting in Italy, from the communist uprisings of the late '60s and punks in the early '80s right through to the current situation. Finally, we catch up with one of punk's most striking artists, Portland's Dennis Dread, whose stunning and provocative artwork has graced the covers of punk and hardcore records for years. All this plus the usual columns, news, and the most extensive review section in punk—all the recently released records, zines, demos, books and films!