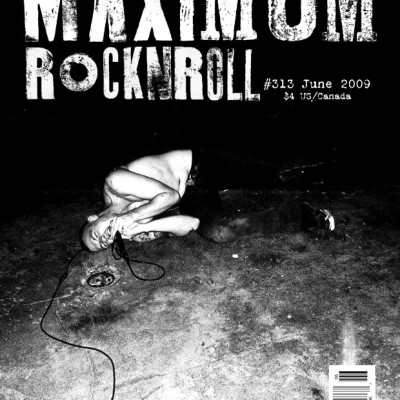 Maximum Rocknroll Issue #313 (June 2009) is out now! With interviews from Florida's dissonant hardcore reprobates CULT RITUAL, New York's own Pick Your King-fueled goofs ACID REFLUX, and the damaged hardcore of Milwaukee's HERDS. We've got features on San Francisco's lady post-punkers GRASS WIDOW, and the Spanish punk influenced NN, featuring Martin Sorrondeguy, who is both a former MRR coordinator and a former member of LOS CRUDOS! There's a piece on HUNX AND HIS PUNX, who offer up some bratty, queer flavored power-pop, along with an interview with Sweden's politically charged PROJECT HOPELESS; and Portland's DEFECT DEFECT talk about life on the road, from Eastern Europe to Cuba. We have another Lance Hahn anarcho-punk history piece on cult favorites TOM'S MIDNIGHT GARDEN, and a piece on the late '70s Toronto punk scene through the lens of the mod-punk EXISTERS. There are BOSTON and SYDNEY scene reports too! All of this plus the usual columns, and the most extensive review section in punk!