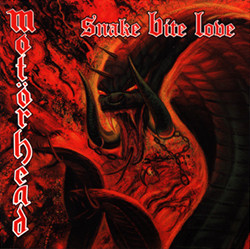 14th record by the masters of loud rock'n'roll. This is fan club release but you can't go wrong with it as it sounds good and the songs on the record are sublime!!! In the rock and roll world, the word Motorhead pretty much rhymes with "legend". With a career spanning more than 25 years, Lemmy and Co have always stayed faithful to their brash, loud-as-fuck hard rock sound. In fact, they have become part of the holy triad of "every-album-sounds-the-same": Motorhead, AC/DC and Iron Maiden :D.
But sounding the same every time doesn't mean they are a bad band. This is fully proven by the quality of most of their albums, and by the number of quotable songs in their repertoire: Ace Of Spades, Sacrifice, Bomber can all be namedropped in a "who-knows-their-metal-better" type of conversation. The band's latter stages may not have been as proficient or legendary as their earlier years, but Motorhead have continued to produce a fairly reliable and respectable output.
Snake Bite Love is an example of that output. Ace Of Spades it may not be, but it's still a record that teaches younger, snottier bands a thing or two. It comprises twelve rocking, rollicking songs that, while never straying too far from the typical M-Head sound, still manage to incorporate elements lifted from different musical genres, ranging from punk to metal, stoner rock or even tribal groove metal! Yet, once again thanks to the band's experience, the album never sounds like a melting pot, instead incorporating the different genres into the group's trademark sound.
But the fact that the band are flirting with different genres doesn't mean they aren't capable of rocking out like before. The intro riff to Love For Sale is a clear example of just that, assaulting our speakers with monolithic force.