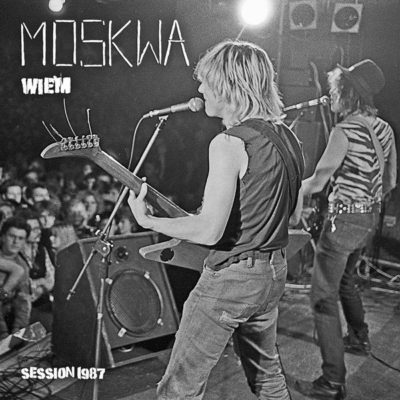 In 1987, a new chapter began in the history of Moskwa. The band's intense and wild period between 1983-1986 had closed without the release of any vinyl output. This was true despite the cult status of the band. Moskwa experienced their next line-up change with Guma being joined by Maleo (Kultura, Izrael) and Gogo Szulc (Tzn Xenna, Tilt, Armia). Warsaw became the band's home city. New material was prepared, deviating from the original sound that had dropped Polish punx to their knees. The band's aim was to record and release their first vinyl LP. In early 1987 however, before their LP sessions, Moskwa recorded four songs in an studio arranged at the Spatif club in Łódź. These songs were intended for use on the air by the "Rozgłośnia Harcerska" radio station. The sound surprised fans of "early" Moskwa who were disappointed at the beginning. In time however the catchiness, and interesting arrangements changed minds across Poland. These unreleased recordings from the Spatif session still work well after all these years. These four songs are an interesting addition to Moskwa's output, and they definitely deserve to be immortalized on seven-inch vinyl.