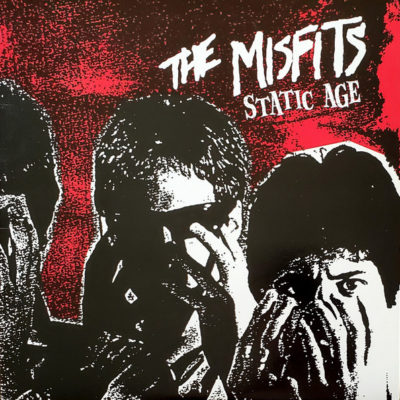 BACK IN STOCK!!! "Static Age" is the brutal, lo-fi debut by the Misfits that didn't see actual release until 20 years after it was recorded. This pressing does justice to the band despite adding some mildly annoying crackle. I consider the LP to be an unimpeachable classic of punk rock and modern American music in general. Every song is melodic and memorable, and Glenn Danzig's emotive, commanding vocals take the proceedings to the next level. The bonus tracks round the album out well.

It's hard to imagine a record this potent failing to find a label to release it at the time it was recorded. The album is not just punk rock; relentless songs like "Static Age" and "TV Casualty" presage the dark rabbit hole of post-punk. While I'm not a fan of the over the top horror lyrics at times, I appreciate that they chose to pursue that aesthetic as part of their whole vision. Their commitment to this vision produced something of lasting value and listening pleasure. While surely they owe a debt to the Ramones and the foundation of rock and roll in general, their unique song craft and style set the Misfits apart, and their influence on the punk and metal that followed them cements their legacy. Highly recommended to anyone remotely interested in American punk rock of the 70s.