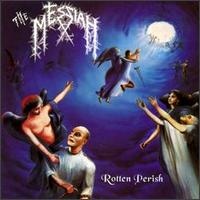 BACK IN STOCK!!! Deluxe reissue of this Swiss death/thrash gem, housed in a high glossy laminated gatefold jacket.
If you tend to associate the Swiss metal scene of the 80s and early 90s with CELTIC FROST and CORONER, they were not the only bands making headway into the international scene. Death/thrashers Messiah were at it for years, forming in 1984 and producing a series of albums and short releases that bridged the band from a thrashing core to a more death-laced impact. "Rotten perish" is perhaps the band's most Death Metal oriented offering, sometimes in the vein of GODS like Death, Deicide, and Oppressor with a bonecrushing overdose of death/thrash riffing.
All things considered, this album is superb. If you already dig early 90s death metal, or throwback DM bands like Pentacle or Armoured Angel, check Messiah out immediately!