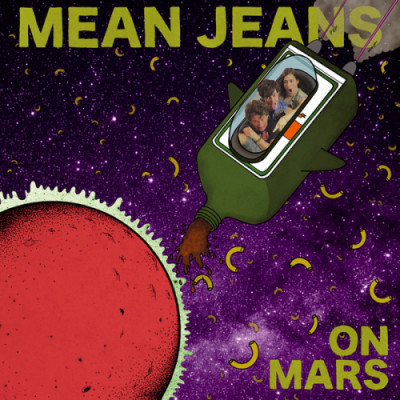 Their sophomore album. Originally released on DIRTNAP RECORDS!
Portland’s premier party punks The Mean Jeans return with their long-awaited follow up to 2009’s Are You Serious! This is a different album, though, more mid-tempo catchier, and poppier (but less “pop punk” if you know what we mean) than their debut. In addition to the standard 3 piece instrumentation, Mean Jeans On Mars also features, at various times, acoustic guitar (!), keyboards (!), drum machines (!), empty Jaeger bottles (!) and boxes of macaroni (!) played as extra percussion. Oh and it also features the debut of new member Jr. Jeans on bass! (Howie Doodat is busy tearing up Portland in the Suicide Notes!)
This is a fantastic, exhilarating summertime pop album, so down a couple of jägerbombs and get ready to moonwalk into the unknown with the Mean Jeans!