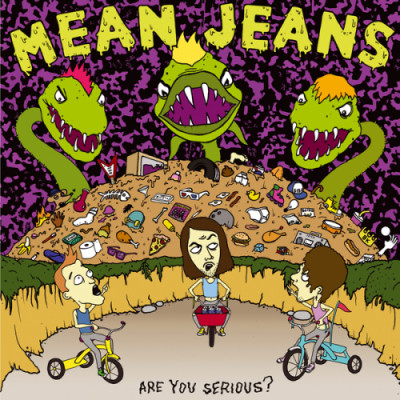 Are You Serious? (LP)

Their debut effort from 2009. Originally released on DIRTNAP RECORDS.
THE MEAN JEANS are the kids that live down the street that blare the Ramones and the Angry Samoans late at night while they are playing “Edward 40s Hands” (that’s the game where a 40 is duct-taped to each hand, making it difficult to urinate until they are consumed). They have 3 things in their refrigerator: ketchup, beer and slime. THE MEAN JEANS were born when, at the ripe ages of 23 and 24, Jeans Wilder (skins, vox and smokes) and Billy Jeans (vox, riffs and spliffs) started playing their parent’s DC-area basements in the winter of 2006. They grew another member, Howie Doodat (AKA Jean Jeans on the bass guitar), after moving to Portland a year later. They’ve been pounding out drunken headbanging seshes across the US since then. This doesn’t count the Chattanooga Tennessee stop, where high schoolers stole their spot and played Blink 182 songs for over an hour. The Miller High Life wasn’t getting them drunk at all, and the guy who “booked” the show was weeping in his sister’s arms.