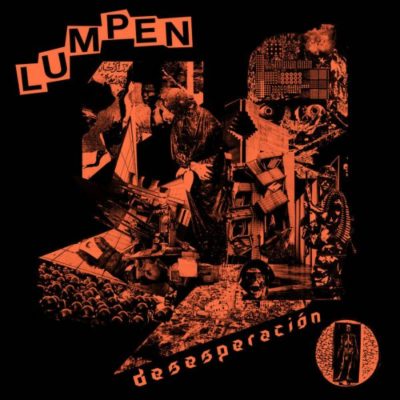 LUMPEN is a band gestated in Barcelona and carries the undeniable touch of rawness that the Colombian roots of its members provide. It sounds pretty close to what the cover art -designed by its bassist Mateo Correal- suggests, and without a doubt it embodies its title: despair (desesperación). Iconic rhythms of the UK-82 accompany messages that invite us to take over public spaces and a kind of urban guerrilla self-managed by the nihilistic impulse propitious of punk. Aiming strictly to capture a feeling rather than replicate a style substantially musical, the bass rhythms in a melodious boom consume the listener into what feels like being sucked into a dark pit of tar. As a matter of fact, a voice in agony accompanies visceral bursts of noise that incite to an insane pit. With extreme influences that range from Chaos UK, Disorder to The Clay, LUMPEN itself is a totally crackling proposal, inviting an anti-partisan political initiative that is far from the conformist nihilism that prevails during these times. (Educacion Cínica)