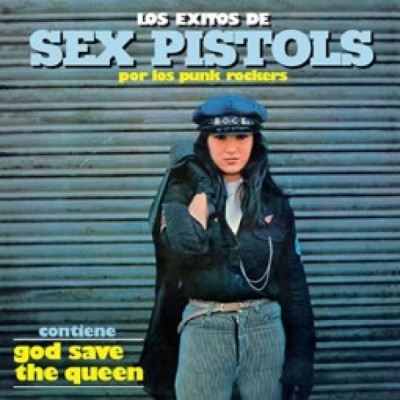 This is an reprint of a Spanish LP from 1978 covering the entire "Never Mind The Bollocks" LP. It is so bad and terrible, it is unintentional comedy. The next time some sad middle aged "Punk" asks you to put "Never Mind The Bollocks" on at your next soireé, slip this into your iPod playlist. If this classic was the real Pistols second album it would have been perfect, but alas real subversion wasn't ever really on the agenda, and the "Punks" all got a future. If you don't know what this great record is, it's a Spanish only punk cash-in that is a session musician created replica of the aforementioned "Bollocks", but fronted by what sounds like the first bloke they could find on the streets of Madrid who had heard of Rock'n'Roll; played the Pistols album to him once, then said "Ok, lets do a take", with the poor witless fool trying his best to remember the lyrics. There's lots of Rottenesque cackling laughter, and mucho misheard versions of Lydon's art-foundation course scribblings of yore. My favourite being the almost Burroughsian version of "Seventeen" ('s) chorus ("I'm a lazy Sod"), which is gloriously transformed into the dadaesque "I'm a Lazy Seven"!!!?? And there's plenty more where that came from, but I won't spoil the fun,I'll leave it to you digital plunderers to discover for yourselves. Musically, the sessionista faux-punk bland out was only ever bettered by the backing tracks from the magnificent second album by the immortal Adverts; ie "A Cast of Thousands"(1979); which I hope was a deliberate act on the part of TV Smith and co, and a unmatched middle finger to the cast of thousands of Travis Bickles in denim and levver! This is fucking GREAT!, and don't you just love that cover; its as if the designer had done his research on Punk Rockers by reading Kays Catalogue (cheapo and probably now defunct UK shopping catalogue from the 70's/80's).