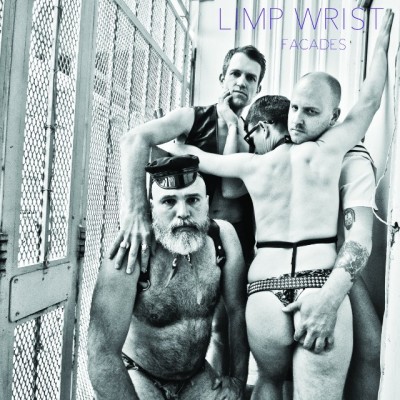 Limp Wrist brings you 11 new trax of complete punk faggotry, not for the weak at heart and never will be. Album download comes with 40 page booklet containing lyrics, photos, and submissions from invited artists.
Facades is Limp Wrist’s first collection of new songs in almost a decade and their first full length album in even longer- if Discogs is to be believed, they released their self-titled LP in 2001(!). It’s everything that you would want from a new Limp Wrist album. If you’re unfamiliar with the band (particularly if you’ve only been involved with punk rock for a handful of years), they, and I’m quoting vocalist Martin Sorrondeguy here, “put the ‘-core’ back in ‘queercore.’” Their brand of hardcore is similar to the way that Void and Cülo play hardcore: loud and vicious. Mix in the current political climate in America, and you’ve got a recipe for a great album.
Lyrically, Facades is just as sharp as the music, hitting topics that range between generational gaps (“experiences so old, what could old queens possibly know?” from “Wrap Yourself In Me”) and sexual identity (“men talk about my maleness and how I tamper with the line” from “They Tell Me”), to closeted politicians (“pass laws that harm and destroy / filthy mind- pretend to be straight / closeted you’re falling apart” from “Don’t Want You”) and the privileges of hetero culture (My Spanish is rusty, but I’m pretty sure that’s what “Como Vos” touches on). In one of the album’s more uplifting moments (if you can call it that), “Thick Skin” features advice to any young LGBTQI listeners.
In an abrupt twist, the album’s B-side takes a complete tonal and stylistic shift. The album’s final three tracks, “In My Mind,” “Dead Artist,” and “Systems in Place” are electronic-driven tunes, more akin to what you might expect at a rave in the early hours in the morning. They’re slow burners (if you’re throwing a dance party, don’t start with these tracks), falling somewhere between techno and maybe industrial? I don’t actually know, I’m very much out of my wheelhouse here. But that’s what makes the inclusion of these tracks great- it provides the listener, likely some dumb punk kid such as myself, with a way to see- err…hear- a different aspect of gay subcultures that can’t be expressed through Limp Wrist’s usual style.
Regardless of the genre that Limp Wrist decide to play, Facades is the type of punk album that we need in this day and age. We’re lucky that they’re back.
Nearly 20 years ago, Martin Sorrondeguy, frontman for Chicago DIY hardcore legends Los Crudos, formed Limp Wrist, a confrontational queercore band that also features members of underground punk staples like Devoid Of Faith and Hail Mary. (They practice in Philadelphia, but all four members live in different cities.) Over the years, Limp Wrist have been only intermittently active; their last album was a self-titled 12″ that came out in 2009. But now, Limp Wrist have returned with a frantic, pummeling new album called Facades. It’s raw, urgent old-school hardcore, and the lyrics are defiantly, explicitly sexual. (One chorus: “Come and get my seed!”) There’s also an entirely unexpected development near the end of the album: House music! This record fucking rules, and you can stream the whole thing below.