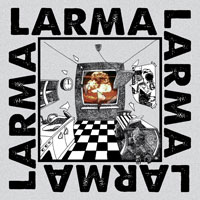 Skåne käng punk like there's no tomorrow! For fans of Skitkids, Stress SS, Arsle etc :-)
US press on Beach Impediment.

Usually, you can’t wrong with Scandinavian d-beat, especially for a band that features former members of Skitkids, Stress SS, Infernöh, Arsle, and Herätys. These guys from the Swedish province of Skåne certainly have some solid reputation for delivering a wicked blast of aural chaos in the past, and now with Larma they start a new legacy that is promising indeed!
Full of emotion, genuinely pissed and threatening, this shit knocks you over and set the place on fire. Ripping like there’s no tomorrow, Larma falls somewhere between the manic d-beat style of Totalitär backed up with totally crushing Swedish-language vocals and pulverizing riffage in the tradition of Japanese “burning spirits” school of dark arts. The 11 songs on here fly by pretty quickly with a great deal of variety, ranging from the aforementioned old school hardcore and käng punk essentials to their own sheer brutality and originality, making this a relentless attack on the senses for those who still like their hardcore raw and unadulterated. Larma, unlike any of the d-beat clones out there, is catchy in all the right ways and just reeks of fun & high-octane hardcore energy.
Basically, in their debut LP released through the Copenhagen based Adult Crash label and coming back straight from the K-Town Hardcore Fest 2019, this new Swedish gang have managed to flip the monochrome monotony of d-beat on its drunken head to provide something really exciting that will please even the most picky and stubborn hardcore punk listeners out there. Definitely one of the best käng/crust/d-beat infused hardcore records I’ve heard in a while, you really have to get this.

Sweden’s Larma might be a new band but just knowing their pedigree is a clear indication of the spicy Swedish meatball of hardcore fury they are bringing to the party. Featuring former members of such powerhouses as Skitkids, Stress SS, Infernöh, Arsle, and Herätys they tear through 11 tracks of high octane and absolutely blistering Swedish hardcore.
But this isn’t all-go-no-slow paddle thrash—instead they’ve taken the lessons that Totalitär set out before us to heart. While this does rip and rage it never goes full bore into a mindless whirlwind of hammer to face battering territory but injects a constant feel of catchiness and hooks. Occasionally, they downshift into these absolutely brutal, skull stomping, Oi!-styled breakdowns—for example the song “Avståndets Psykologi.”
D-beat is such weird thing—so often it falls quickly into this sort of plodding and inept take on Discharge or more often into this metallic crustlord territory played by extras from the Lord of the Rings. This is not to say that I have anything against the Uruk-hai or inept music in general, lets be clear on that point. However, its just when something that is infused with Minor Threat levels of energy and musicianship comes along it just makes the hairs on the back of my neck stand up and I take notice. In a world of orcs and goblins, Larma rises above the fray appearing at the dawn like Éomer at the Battle of Helms Deep to smash the pretenders and save the day.
They are just a magnificent display of what is possible with the Buzzcocks' glorious invention—that simple pulsating beat. While it is early, for me this is a serious contender for Album of the Year.
(Michael D. Thorn)

Larma’s self-titled album exceeded expectations. The Swedish band tore through 11 high-octane tracks with blistering kängpunk, d-beat, and plenty of Totalitär-worship on display. Best of all, though, Larma had a gift for dropping big fat hooks into otherwise red-raw maelstroms. Impressive stuff.

Only the Swedes can pull this off, if they weren’t from Malmö I don’t think it would be as good. Putting a mark on where HERÄTYS left off. (Hafiz Bastard)
TOTALITÄR is a funny thing. There are so many bands trying to do it, that it’s almost a genre unto itself, but the truth is that few get it right. In this case, the members of LARMA get it very, very right. True Swedish Hardcore Punk Mangel. Ripping from start to finish. Not one dud track. Play it loud and play it again. (Greg Benedetto)

Fuck, I think I just played the fuck out of this record as soon as we got it in the shop. After taking a break for a couple months and revisiting, I can tell you with 100% certainty that it kicks so much ass. Swedish HC brought to you by some of the same folks that brought you Skitkids (among others). (Eric)