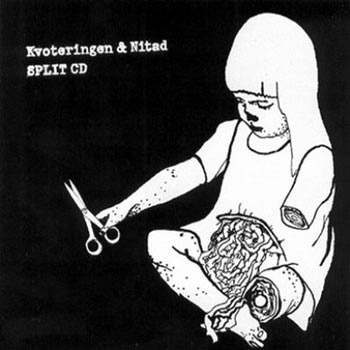 BACK IN STOCK!!!
SWEDISH HARDCORECORE PUNK NOW
This is a brand new release by one of today's most active group KVOTERINGEN!
Featuring Jallo from TOTALITAR!
This is a 100% pure scandinavian D-BEAT HARDCORE ATTACK much raw & straight than TOTALITAR with some lyrics about ecological destruction made by human kind.
This can also be called ecosystem swedish raw HC!
NITAD who has just released the debut EP known as the PUNK ROCK band after Regulations,Vicious,etc playing primitive,rough,loose KILLER 8-beat PUNK ROCK sung in Swedish!
This is a must for all PUNX!Comes with Swedish,English,Japanese lyrics!
3 songs each!
total 6 track split mini album!