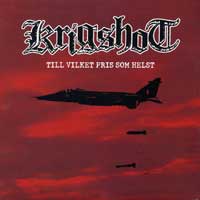 Just when you thought D-beat punk couldn't get any better, along comes KRIGSHOT with seventeen new songs to raise the bar once again! In conjunction with Communichaos Media, we are proud to offer up the fifth and greatest full length release (the title means "At Any Cost") from these modern-day Swedish hardcore legends. Formed in 1997 Jallo (MEANWHILE, TOTALITÃ„R, etc) and Anders and Mieszko (NASUM) as a "low-key project," they have recorded some of the most brutal music to come out of the modern day Swedish hardcore scene. For this new recording, they have recruited Bjorn of DISFEAR on bass dutires and Poffen of TOTALITÃR on vocals, giving a more punk edge to the vocals, in contrast to Mieszko's more hardcore style on previous releases.