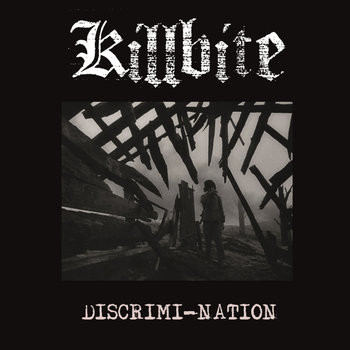 KILLBITE from Bremen / Verden, Northern Germany are a "newer" band that will kick a lot of asses in the contemporary Crust, Punk scene. The band definitely sees their roots in the swedish, british Crust music, but influences from more modern US Punk, Hardcore are added and on the top KILLBITE is not afraid to deliver the brutality and heavyiness of swedish Death Metal. KILLBITE aren´t really working with hyperfast tunes, they have their best times in their midtempo parts, sheer brutaliy meets a lot of variety, unlike many other acts the guys from KILLBITE manage to sound different, unique and the listener never feels like listening to a stupid copy of some well-known acts. "Discrimi-Nation" is the perfect album for the addicts of Crust Punk that also like Death Metal, this freaks that are in love wiith ENTOMBED, TRAGEDY, EXTREME NOISE TERROR, HELLSHOCK, WOLFBRIGADE or SKITSYSTEM.

The second strike of KILLBITE after their debut 10" "Brilliant Hell" is more than great, their first output was powerful and heavy but "Discrimi-Nation" is a big step forward, setting some standards in modern Crust Punk made in Germany, finally a valid proof that other countries than UK, Sweden USA have great Crust bands too.

This wonderful album comes on Black vinyl with Silver printed band logo / album title on the front of the cover, extra lyric sheet and the full album on a bonus CD are added too.