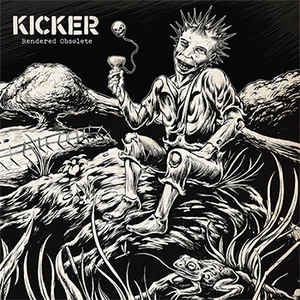 Oakland punk supergroup KICKER – featuring within its ranks members of Neurosis, Dystopia, and Jello Biafra And The Guantanamo School Of Medicine with infamous veteran road dog, Pete the Roadie, on vocals — will release their Rendered Obsolete full-length via Tankcrimes/Pirate Press Records next month. The nine-track offering comes sheathed in the maniacally detailed cover craftings of Skinner (Mastodon, Kvelertak, Skeletonwitch), and is a true must-have for fans of Subhumans, Rudimentary Peni, Crass, and general sonic disorder.

Following up their 2012 Tankcrimes full-length Not You, KICKER’s Rendered Obsolete is brimming with the same cheeky, clever, and catchy two-minute hit-you-over-the-head bouts of realism that earned them so much acclaim in the first place. Pete’s inexorable energy, dedication, and booze-soaked cockney exuberance, alongside the rest of the band’s sheer talent and experience is clear, inspiring, and the reason why punks, skins, metalheads, drunks, and everyone else at the bar loves them so much.

In advance of its release today Punknews is streaming “Full English” for public consumption. Elaborates Pete the Roadie “We are older punx right; we don’t write songs about rioting no more, we write songs about breakfast.”