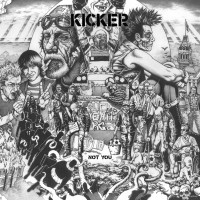 Vinyl LP pressing includes download. 2012 album from this pure Punk Rock band from Oakland, California featuring members of Neurosis and Dystopia. A punk since its inception, band leader Pete's been working as a roadie for the past 30 years and is now yelling into a mic of his own. 14 tracks on this debut album take their cues from early UK punk and American hardcore, each one exploring the unique and new world of aging punk rockers.

The pedigree behind creation of art drives the meaning of the subject as much as the subject's own expression. For example, Morrissey famously declaring "I have forgiven Jesus" yields a wildly different meaning than were say, Brian Fallon, to say it, even if the words themselves are exactly the same. And, even if you were to quarantine the creators from the art, and focus on the product itself, the separate meanings behind the identical phrasings takes form through expression and even vocal inflection, which itself yields volume of information through timbre, volume and tonal quality alone. What makes Kicker's first LP, Not You, so amazing is that the pedigree of the band ignites an already fiery performance and makes it explode.

Any mention of Kicker has to mention the new-ish band's membership. Namely, on vocals is Pete the Roadie, who for the past 30-odd years has roadied for everyone from the Subhumans, to Amebix, to Chumbawamba, to Fugazi, to Jello Biafra, to Neurosis. But, he's more than just a roadie. Involved in punk from the beginning, Pete is a walking history book. Between his spiked hair, genuine cockney accent, locket necklace, ubiquitous patched jacket and nearly 60 years of age, the man exudes the energy, excitement, rebellion and fun of the earliest punk.

Likewise, the band itself has a vaunted history, though it somewhat stands in contrast to Pete. Whereas Pete is an English expatriate, the band is entirely American. Guitarist Dave Ed plays in drone-metlal legends Neurosis as well as the spikier (and nastier) Jesus Fucking Christ. Bassist Toby played bass in doom/crust metal legends Dystopia, who drove punk into an even deeper, nastier, grinding territory. Drummer Toby played in Filth, one of the U.S.'s earliest, and fiercest, crust punk bands.

It's important to roll call the band because their personalities and history electrify the album. Not You is rooted in UK82 sounds. Thick, choppy riffs energetically smash through the album while Pete howls over top about being broke, being bored, being old and being drunk. But, frankly, and perhaps blasphemously, while this album is as good as the classic slabs by the UK Subs and GBH (or maybe even better) it's not pure old-school aping. While the music is based on the simple, powerful riff, because the band themselves come generally from a crust and experimental background, the band hides darker, sludgier sounds underneath the driving riffs which gives the album an uniquely American heaviness, but a uniquely British energy.

While Dave Ed pounds out a simple, but effective three chord riff on "Innit," bassist Toby slides a sewer-like screech underneath that instead of detracting from the rhythm, gives it a dangerous, and uniquely stimulating edge. On "Walking Headache" the strings crash down like massive crust walls, but drummer Toby keeps driving the song forward in an almost-classic rock, which makes the song both heavy and frantic. So rarely is rock and heaviness so successfully combined. The effect of which is that while the album sounds mean, rough and tough, it straight up rocks. Instead of wearing the listener down, it fires one up.

The songs are strikingly good. Particularly in American punk, texture tends to outshine songcraft, creating songs that "sound cool" but actually have little sonic substance. By contrast, here, Kicker kicks 13 simple, two-minute smashers, but the songs sound as fresh as if punk was created yesterday. The songs might be simple and short, but at their fundamental level, they have a flow, cadence, and logic that makes them as well written as classic '50s boppers. It's exciting and nearly unbelievable at how the band managed to take such a well worn style and apparently find the thirteen completely awesome, classic sounding, songs that hadn't been written yet.

But, of course, what really sets the album on fire is the band's frontman. Even though it's purely an aural affair, you can see the devilish glint in Pete's eye. Although him yelling "You invite me to your art show, am I impressed with this? / It won't be hanging on my wall, this is top notch shit!" would be funny on its own merits, coupling with Pete's heavy cockney accent and slightly boozed-out voice makes it uproarious. Interestingly, on "Crusty Island" Pete pauses to harp on change begging crust punks. Further, when he sings "Insufficient funds! / I can't believe it's true / They finally cashed that fucking check that I wrote in '92!" it comes not from a broke teenager, but a person that quite literally dedicated his life to punk and has nothing to show for it except a bounced payment, and somehow, instead of being sad, it's hilarious.

Part of this is because of the band's enthusiasm. Their collective age is probably over 200, but they are not only playing these songs with the joy of 18-ear-olds, but they play them with the raw expression of punk's first wave. Kicker doesn't seem to be concerned with making a big statement or seeming cool, they just want to rock out and sing about booze and bills. And, by doing so, they actually do make a larger statement. This is punk rock from punks who have been through multiple phases of the genres. They're old, broken down, boozed up and downright hilarious. What makes Not You so successful and so interesting is that only these punk rock veterans, through their experience, years and talent, are capable of making an album like this one. When one applies the knowledge of the band members' various histories to their contemporary tales of drinking, fighting, and money woes, so much more becomes apparent than were one to read the lyrics alone.

On "Broke" there is a skit where a drunken Pete, who is stumbling home, gets hit by a car and when asked by a paramedic "Do you know what year is it?" he screams out "1977!" Clearly, he's wrong and that wrongness is what makes this album so successful. Kicker isn't playing retro music�??they're playing contemporary music as written by a bunch of old punk rock dudes who, despite having nothing to show for it, are still as excited by the music as they were when they started. That makes me excited too.