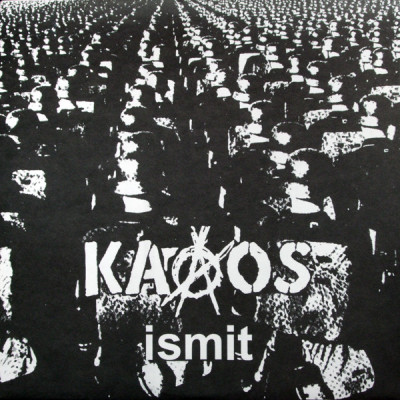 KAAOS formed in March 1980. In the beginning of 1981 the first real line-up started to play noisy hardcore with UK & US influences. KAAOS´ first 8 song EP came out as a split release with a band called CADGERS (later named RIISTETYT), followed by some chaotic gigs and a couple of songs for various compilations. While guitarist (and later vocalist) Jakke being the only original member, the line-up changed frequently. As the band had very loyal fans all over the world they released their famous "Totaalinen kaaos" EP on Propaganda Records instead of breaking up. The EP became one of the bestselling finnish records ever. The album "Ristiinnaulittu Kaaos" appeared early 1984 on Barabbas Records. During the bands first European tour German Weird System label put out a KAAOS/TERVEET KÄDET split LP called "So Much Fun". In 1985 KAAOS giged all over Scandinavia and the rest of Europe, recorded another EP (which came out in 1993) and did their final show in December ´85.
In 2000 the band embraced their weapons again and started playing again. This is the last record of their career and it seems time hasn't changed em at all.