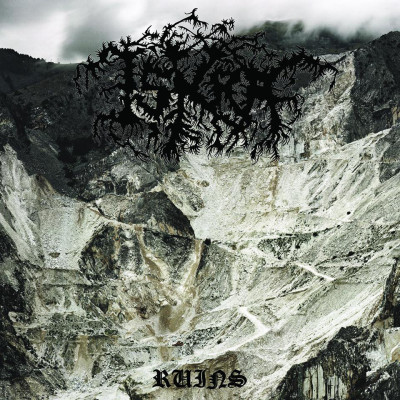 Prepare to be devastated!
“Ruins” is ISKRA’s third studio album and by far their best one yet. Recorded in February 2014, Ruins was engineered and produced in true DIY fashion by ISKRA's own drummer Cody Baresich. The album was then mastered for vinyl at Sweden's CUTTING ROOM by Martin Ankelius.
"Ruins" contains 10 punishing songs with lyrics ranging from anarchist theory, military drone strikes on civilian populations, historic native american battles against european colonialism, and a yearning to be free from draconian laws. Combined with over the top riffs, devastating blast beats, pulverizing toms, and the occasional dive bomb this LP will leave your speakers smoldering. Not only is this one of the most intense records PROFANE EXISTENCE has ever done it, is also one of the most beautiful presentations we have seen in recent years. The stark mountainous cover resembles Middle Earth artwork but the real gem is the 11in x 11in 12 page booklet inside. Printed on glossy paper, this booklet contains not just lyrics but very thorough explanations of each song. This vinyl release is financed by a number of DIY labels from around the united states and Canada. Including, PROFANE EXISTENCE RECORDS (USA), BLACK RAVEN RECORDS (CAN), DOOMED SOCIETY RECORDS (CAN), WAR ON MUSIC (CAN), WHAT IS MAKING US SICK (CAN), NOCTURNAL RIEGN (USA), and ECHOES FROM BENEATH (CAN).