Mailorder > 7" > INDOCTRINATE – … And All Hail To Progress And Efficiency 7″ 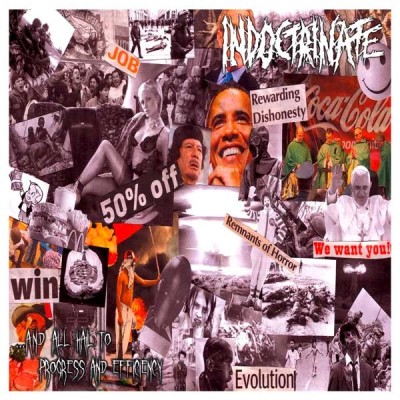 INDOCTRINATE hail from Austria and are a political (anti-fascist, anti-sexist, anti-authoritarian and animal friendly) DIY crust punk band who play a catchy, abrasive and diversified blend of hardcore punk and d-beat/crust. Their music also incorporates elements from grindcore, post-hardcore, doom/sludge and other sub-genres of metal.
The rather dark and at times gloomy lyrics deal with political, environmental and social matters influenced by ideas that are best described as anarchist. At the same time they are conveying hopes for the creation of a better, freer and more just world devoid of the current restraints and shackles that enslave human as well as non-human beings today.
This 7" is INDOCTRINATE’s second release after their demo tape and includes two brand new tracks from these dissenting, angry, thrashing kids. Profane Existence was proud to help out with this release along with several other fine DIY punk labels from around the globe