Mailorder > 12" > IMPERIAL LEATHER – Something Out Of Nothing LP 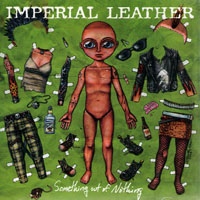 Something Out Of Nothing (LP)

Hailing from Stockholm, Sweden are IMPERIAL LEATHER, appropriately named from the brand of soap used by punks in the UK to charge their hair.
In their five years existence, this band have made quite an impact in Sweden and beyond, having already toured Europe and the USA extensively, and released several EP's and a cassette.
Musically IMPERIAL LEATHER are classic punk rock, with a very UK '82 type sound, with two vocalists who trade singing duties.
The personnel line-up of this band is the stuff of legends, with Amyl Nitrate of the SPIDER CUNTS taking on vocal duties, with other members belonging to Swedish "legends" such as NO SECURITY, DISCHANGE, MEANWHILE, BURNING KITCHEN, BRUCE BANNER, DS-13, etc.