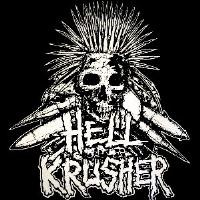 Hellkrusker started back in 1990 after Scotty left hellbastard. Finally after almost twenty years since it's first release and available for the first time in it's entirety, Antisociety Records brings you the full studio recording of Hellkrushers Fields Of Blood studio recording session, eight tracks of furious crust punk some of which were never released until now. Backed up on side B by the full studio recording of the split ep with Japanese d-beat ledgends Disclose this is a must have record for your collection. Fourteen tracks in total with the two line ups that captures Hellkrushers sound from 93 to 94.