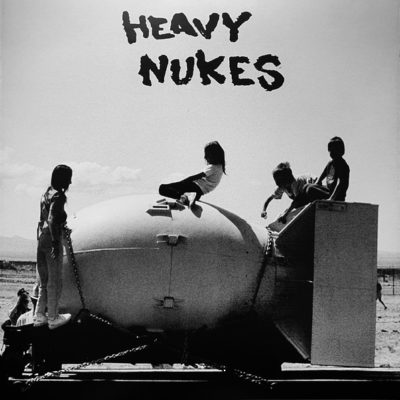 Here we go with the long awaited follow up release after the briliant "7 and the "12 with 4 unreleased, unheard Heavy Nukes songs, still in the Shitlickers vein, the best way possible. Four ultrabrutal straight forward classic raw noize bombs, the way we all love it. We are happy as fokk to finally be able to make em public, INCREDIBLE.

Berlin's Earth Crust Displacement deliver another 2 new songs and a coversong of the best Berlin band ever MxVxDx from the same recording session as the split"12 with Disease. Still no compromises at all, straight Dis-Noize Raw Punk on furious speed as they are known for.

Make sure to get your dirty fingers on copies.

Sweden’s Heavy Nukes delivers four new tracks of total Shitlickers worship here. If you haven’t heard the Shitlickers you should rectify that, but think blistering fast metallic riffing and raw, blown-out production, like you took Anti-Cimex’s Victims of a Bombraid and turned both the “speed” and “gloom” knobs up a few notches. As for Germany’s Earth Crust Displacement, their three tracks differ from the songs on their split with Dissekerad, having a faster and meaner, Shitlickers-esque vibe. The last of their three tracks is a cover of the old German band MxVxDx and that one has an epic, almost orchestral tone to it that reminds me of the grandest moments on Discharge’s Why? 12”.