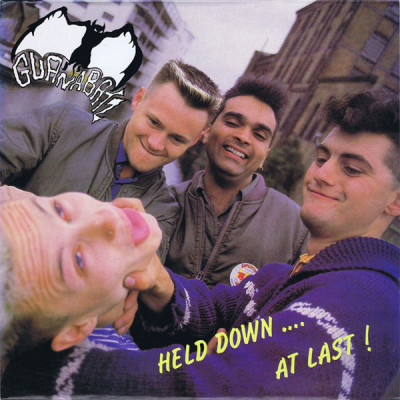 During the first half of the 80's, while the Cramps were gaining underground popularity in the USA, and the STRAY CATS were hitting the charts on both side of the Atlantic, a newborn wave of rockabilly revivalists came out of the ashes of the UK early punk rock scene. Bands like the Meteors, Demented Are Go, and Guana Batz, playing hopped up rockabilly with the speed and the aggression of punk rock, invented the sound and the aesthetics of what soon became known worldwide as psychobilly, an 80's revision of the 50's rock and roll spirit filtered through the mohawk punk movement, 80's horror movies imagery, and a lot of booze. Formed in Feltham, MiddleSex, in 1983, Guana Batz are among the pioneers of the genre, and their 1985 debut album Held Down... At Last! is one the best episodes in the history of psychobilly.