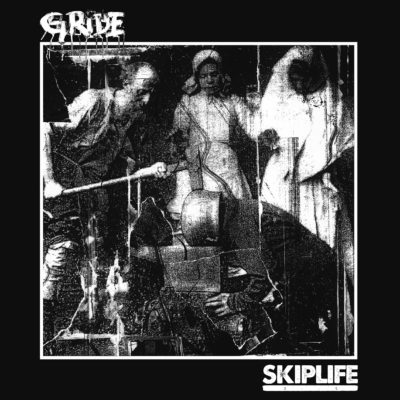 Celebrating a 25 year legacy and classic powerviolence worship on one record! Gride and Skiplife split LP coming out!

One LP, two acts, twice as shorter, faster and louder. Legendary south bohemian commando Gride meet Skiplife, a new band with members of Lycantrophy, Gospel of The Future and Decultivate. The Split LP is coming out on Insane Society Records.

This split LP’s inception is purely accidental. Both bands with brand new recordings on their hands at the very same time, and no real plans or record deals ahead. Forces were joined! Nine tracks of patented explosive hardcore/grind by seminal veterans Gride recorded by Čert on drums/vocals, Honza Kapák on bass and David on guitar/vocals.

“Gride is turning 25 this year and therefore I can’t avoid a certain amount of pathos,” says Čert. “With our band we have managed to create an island of liberty and exuberance, a place where I can feel like a little brat, forever trying to emulate the Britcore icons from Funk As Puck compilation. And the feeling of joy over celebrating 25 years is made even bigger and better by the fact we are releasing a split record with seasoned hc/pv connoisseurs and long-standing comrades in arms from Skiplife,” he adds.

Skiplife managed to hammer 12 songs on their side of the record. Brand new project with members of Lycanthrophy, Decultivate, and Gospel of the Future have no other intentions than to revive their beloved powerviolence the way Infest or Lack of Interest played in the early 90s.

“1998 was the year when I first heard La Revancha by Spazz, Slave by Infest or Despise You. Right away I knew I wanted to play something like that one day. More than twenty years went by, but my heart hasn’t changed a bit. The long wait was worth it. Ride on, long live the violence!” says Skiplife’s drummer Alesh.

Gride/Skiplife split LP is coming out these days on the seminal record label Insane Society Records. Pressing of 500, of which 100 copies will be on limited coloured vinyl.