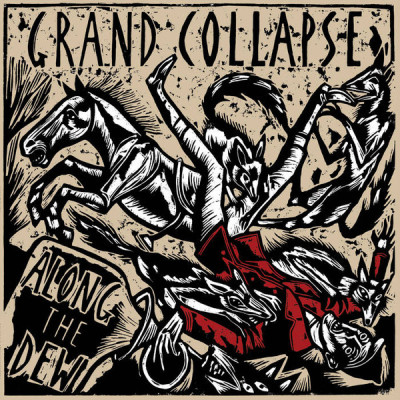 Along The Dew (LP)

In short, the Cardiff quartet known as Grand Collapse have released a complete thrash fest with “Along The Dew”, the band’s follow-up to 2014”s “Far From The Callous Crowd”.
You get around ten seconds of soothing wind and sea sounds before the band unleashes its wrath on opening track “Along The Dew”. And they don’t stop until the last notes of “Trapped” have rung out. If you like your hardcore punkrock seething and foaming from the mouth Cujo-style, then rest assured… these dudes have got you covered.
They pummel your senses on cuts like “Thrissel Street” and “Deep Rooted” with crunchy riffs and a rhythm section that annihilates everything in its path. Meanwhile vocalist Calvin Swell is screaming his lungs out, constantly bordering on completely losing his shit. Thirty minutes of non-stop ass-whooping might be a bit much for some, but there’s no denying that these guys have got a firm grasp on harnessing their rage in short blasts of pure energy.